Scenic English Field at Union Park provides Virginia Tech with a first-class campus setting for college baseball, day or night. The field, which was officially dedicated during a special ceremony on April 8, 1989, is named for the late E.R. "Red" English and his wife, Ruth, who provided financial support for the original construction of the field.

On March 21, 2016, Virginia Tech renamed the baseball stadium to English Field at Union Park in recognition of a generous commitment of support to the athletics department from Union Bank & Trust. The stadium received substantial upgrading with help of $3.5 million committed by the Richmond-based bank. On the date, Virginia Tech's Board of Visitors approved extending naming rights to the stadium to Union Bank for 10 years in recognition of the company's financial support.

Located at the intersection of Southgate Drive and Duck Pond Drive, English Field at Union Park is an incredible new home for Virginia Tech baseball. Designed by Cannon Design and built by Whiting-Turner, the $20 million renovation project added a new grandstand area – with new press-level premium suites – 1,132 permanent chair-back seats in concrete stands and a club level above the first-base dugout, along with a social picnic area down the right-field line. The terracing along the third-base line remains.

The baseball experience for fans begins as they make their way into the stadium through a new entrance reminiscent of the iconic Torgersen Bridge located on campus and named for Paul Ernest Torgersen, university president from 1994 to 2000.

The new grandstands are complete with a ticket booth, restrooms, enhanced concessions, a merchandise office, an umpire dressing room, a storage room for facilities and a visiting team room. The second level includes four luxury suites with an extra hospitality area, broadcast and radio booths, a game operations booth, a press area and video rooms.

The Tech athletics department continues to make upgrades and improvements to the facility, and those improvements enabled the Hokies to play host to their first ever NCAA Regional in 2013. With it, Tech set the school record for college baseball attendance at 3,566 on May 31 of that year. During an exhibition game against the New York Yankees on March 18, 2008, fans set the facility record with an announced 5,311 in attendance.

Before the 2012 season, workers replaced the natural grass surface of English Field at Union Park with artificial turf. As part of the 2017 project, the Hokies received a brand new infield and warning track, while the outfield was manicured. Artificial turf allows the team to practice even during inclement weather, as groundskeepers can remove snow with relative ease. Plus, the field drains quickly, allowing for a speedy resumption of play following rain delays. Also, as a part of the original $1 million project in 2012, workers expanded both dugouts to almost twice the size, constructed a new batter’s eye, improved the bullpen areas and installed a new padded outfield fence.

In the summer of 2008, two other projects began the enhancements at the baseball complex included the terracing of the hill along the third-base/left-field line and the construction of a new indoor baseball facility, which was finished in December of 2009. To see more information on the James C. Weaver Baseball Center, click here.

The terracing provides fans with a unique and comfortable way to take in a baseball game. When added to the permanent seats in the grandstand, the terracing allows for approximately 4,000 fans to be accommodated at any given time. The terracing includes a sloping, paved walkway to allow for wheelchair access and easy navigation.

The terrace looks much like what one would see in an outdoor amphitheater and features a series of steps/seating areas constructed with VERSA-LOK walls and sod-type pads. There is about seven feet of space between each terrace, so there is plenty of room to put blankets down and for children to play.

Coinciding with the terracing project was the realignment of the left and right field foul line fences. Both were cut in tighter to the playing field, significantly reducing the foul territory in the outfield. This change not only provided a new element to the play on the field, but it also allowed the terraces to get a little closer to the action, both increasing room for attendance and giving fans another unique viewpoint from which to watch the game. This renovation also included the addition of both bullpens.

Prior to the 2004 season, a new lighting system was installed. The Hokies played their first baseball game under the lights in Blacksburg on April 28 of that year, defeating VMI, 8-0.

E.R. English, a native of Altavista, Virginia, played as an offensive and defensive guard on Tech football teams from 1930-33 and graduated from Tech in 1934. English contributed to Tech athletics for more than 50 years and was one of the founders of The Student Aid Association in 1949. He served as president of that organization two of its first three years. English received the most outstanding alumni award at Tech in 1984.

Through a generous gift from alumnus George Sampson, the home team dugout was named for longtime Tech baseball coach G.F. "Red" Laird during a ceremony on April 12, 1991. Laird recruited and coached Sampson at Tech.

The Hokies opened play at their new home with a 7-2 victory against George Mason on March 22, 1989, and went on to post a 17-7 home record during their first season in the facility.

Prior to the opening of English Field, Tech played its home baseball games at Tech Park, where it compiled a 431-122-1 record over 34 seasons. 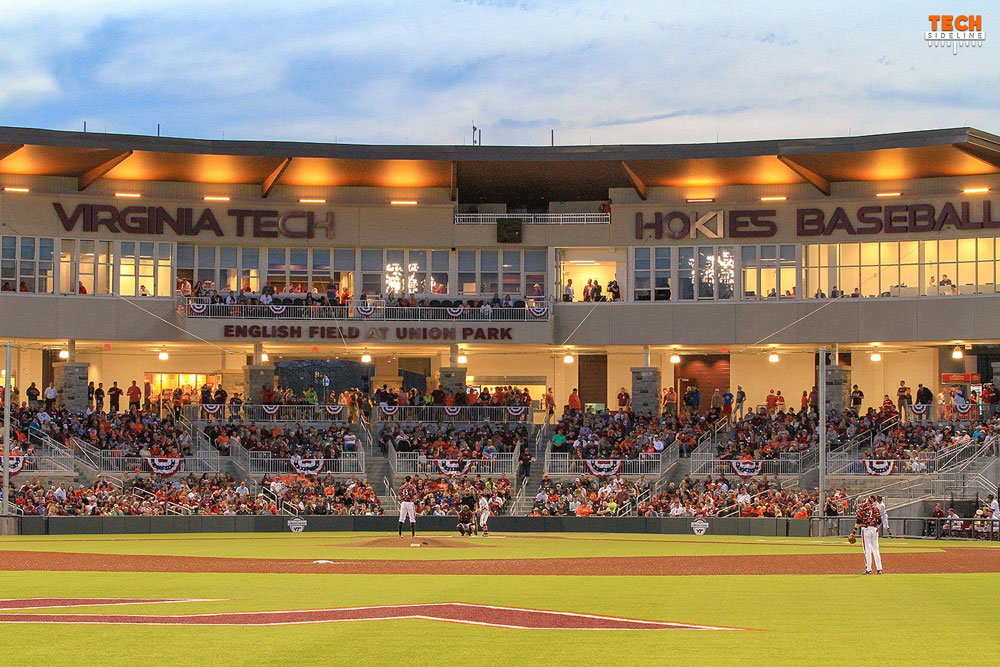 This sports camp is owned, controlled and operated by John Szefc, the head baseball coach at Virginia Tech. The word “Hokie(s)”, or any other reference to Virginia Tech are by permission of the University, and do not indicate, express or imply in any fashion involvement of the University in the operation or control of the camp, whose sole operator is John Szefc. John Szefc Baseball Camps and Clinics are open to any and all entrants limited only by number, age, grade level, and/or gender.